Meet Britain’s Got Talent star and comedian Ben Langley, who has written our first Potters Panto

We are very excited to see our first-ever Potters Panto later this year, which be performed on select dates after Potters Theatre Company’s 2019 Christmas Spectacular.

We know that the pantomime, featuring our comedy team as its stars, will be incredible, especially as it has talented entertainer Ben Langley writing it.

Ben gained national recognition when he wowed millions of viewers on Britain’s Got Talent in 2018 with a misheard lyrics gag that had the nation in stitches. Ben has already written some of the comedy material for the Potters Theatre Company team this year for the main shows and we caught up with him to find out what he has to say about the pantomime…

How is the Potters Panto going?

Well the pantomime took a few weeks to write and I’ve loved writing it. I’m not performing in the pantomime myself but I am in rehearsals with the guys as I want to be hands on, seeing it performed and making sure that the delivery works. I’ve come up with something that feels like a pantomime and also ticks the box with Mark Brewer and the comedy team. Mark will be pushing the narrative and he has his own unique brand so we want it to suit him. It will be very funny and musical, with lots of sound effects. I will also be keeping an eye on the TV and news and will be on my toes with it until the last show is performed! I’m really excited about it and the show will be amazing, and the audience will see the comedy team as they’ve never seen them before.

What pantomimes will you be featuring?

It is going to include and pay homage to three of the main pantomimes - Aladdin, Snow White and Little Red Riding Hood.

How many pantomimes have you performed in?

I have been in 21 pantomimes over the years and written a few too. I love pantomimes as they are such a British tradition and they are great for all the family. I remember the first panto I saw was Gary Wilmot in Aladdin many years ago!

What do you think of our comedy team?

They are an eclectic bunch of humans and all have wonderful individual traits. They are just a lovely bunch of lads, who do such a good job in entertaining such a mixed group of guests. I’ve been a fan of them for a long time. 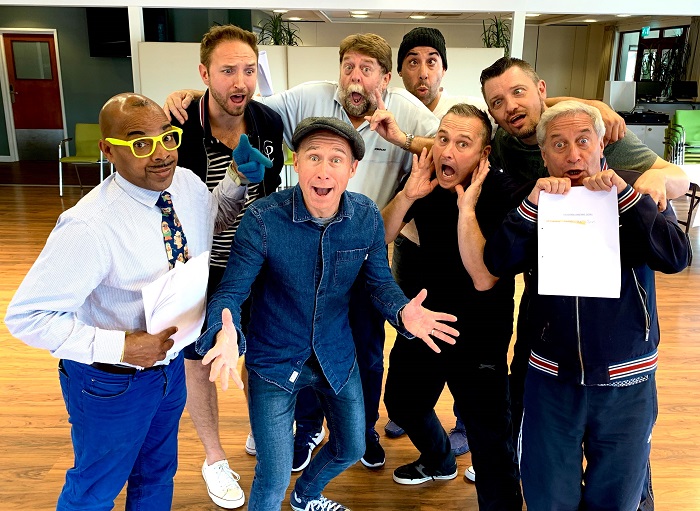 How long have you been working with Potters?

Nicky Hathway and Nigel Pattle came to see me perform in the Norwich Theatre Royal pantomime and got in touch as they loved it. We had a chat and they wanted to get me on board to help creatively and it is such a joy to be working with the team. I’ve written some of the comedy material for the shows this year, like the song Cholesterol Girl. Potters really is one of the best kept secrets and the Potters Theatre Company are so talented, and the rig, the technical team and the investment in the theatre just adds to it and I am chuffed to be part of it all. Around the World in 80 Minutes was the first Potters show I saw and it is just incredible, as are all the other shows I’ve seen since.

Can you tell us a bit about you?

I have spent my life on stage and was in Covent Garden for 20 years with my street show, then got married to Sarah and had two boys, Elwood and Loxley, and then decided to go into variety. I have done comedy and acting, and Britain’s Got Talent changed my profile and the audience now know me before I walk out onto a stage and so have already warmed to me, which is really nice and the show has definitely opened doors. I performed for the Queen at the Royal Horse Show in Windsor Castle, have written stuff for Ha Ha shows for Joe Pasquale, Cannon and Ball and Su Pollard, been a storyteller for Treasure Champs on CBeebies and just feel incredibly lucky.

My wife is a choreographer and dancer, and through that knows the lovely Zac Patterson from Potters Theatre Company. I am 45-years old and just feel really lucky and blessed.

The first-ever Potters Panto will premiere on Thursday 21st November and will be performed after Potters Theatre Company’s Christmas Spectacular, to round off a fantastic night of festive entertainment. Written by Ben Langley and starring all your favourite Potters madcaps, including Mark Brewer, the pantomime will appear on every festive break (excluding 11 Nov and 27 Dec).