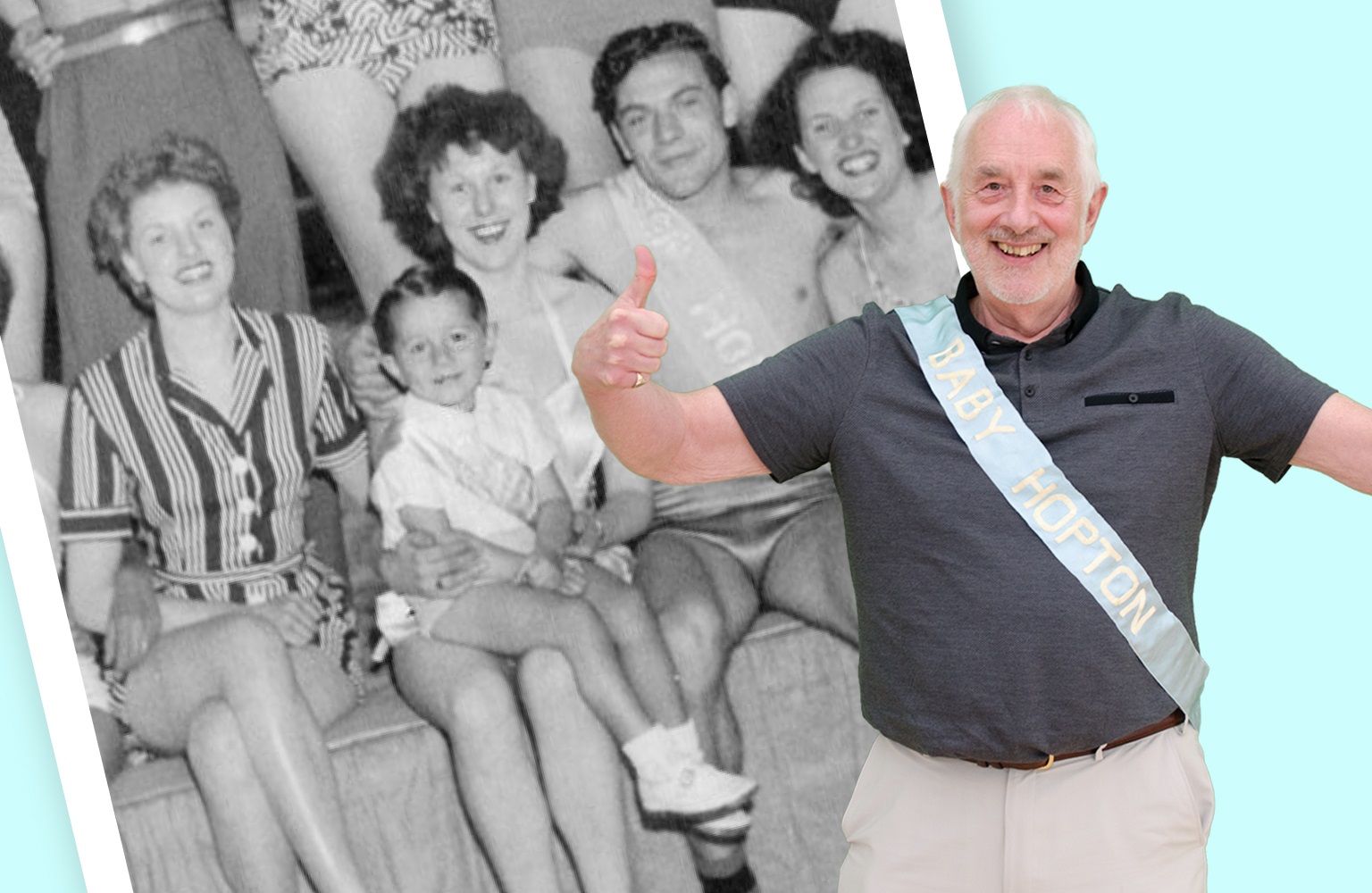 We caught up with guest, David Lee, to find out about his Potters memories, including being crowned Hopton’s bonny baby…

I won the Hopton baby contest when I was around two or three, after my mother entered me in the competition to find the week’s most beautiful baby. There was also a competition to crown Potters King and Queen too. The photo and sash were kept by my mother until she passed away in 1997 and I have kept them since then.

Can you tell us about your earliest memory of Potters and how old you were when you first visited?

My earliest memory was in 1958 when Geoff Parsons, previous entertainments manager who seemed to do everything until Andy Feet joined him, did his cowboy act with guns and whips. It was just what a young boy wanted to see.

How often have you visited Potters over the years?

I started going to Potters with my parents, uncle, aunt and two cousins. We went about 10 times in 15 years, then I went with my friend twice, with my girlfriend twice, who I later married, then we took our son 11 times in 28 years, so I make that 25 times in 68 years! When we first took my son he was looked after by Darren from the activities team, and when he was about 11 years old Buzby taught him to play badminton, and he still plays the sport today.

What is your happiest memory of Potters?

I have many happy memories but one stands out, which is when I came with my friend and dated a waitress at Potters. I was 16 years old and played a joke on her, and she replied: “If you're not a good boy I won't give you any breast tomorrow”, talking about the chicken, of course.

What sort of Potters breaks have you been on?

Mostly on one week family breaks, though I stayed for two weeks once, and even twice in one year, one in June and one at the end of the Summer season, when guests and staff went completely bonkers! But recently, in the last 20 years, I’ve been on the Midweek breaks. The only problem is that I miss Mark Brewer, as he is mainly on family and weekend breaks. But to make up for him we have the Potters Theatre Company.

How much has Potters changed since you first visited?

Potters has changed so much since the 1950s. That’s when there was the wooden chalets with toilet and washrooms in a block. We had no hot water, so my dad would fetch a jug of hot water from the canteen, so we could have a wash in private in the chalet. All the food leftovers was given to the pigs that Potters kept by the football pitch! Reception was a small building by the entrance and we were booked in on a Saturday afternoon after a long journey from Liverpool Street by Hector Potter and his wife. I also remember the beach being sandy, not like now.

What is the best thing about Potters?

The best thing about Potters is that everyone is left to do what they want… if you want to sit and relax you can do so in peace and quiet.

What do you enjoy doing when you are at Potters?

I like doing everything my 70 year old body will allow, from swimming to pitch and putt.

How was your recent break, where you turned 70?

This year I celebrated my 70th birthday at Potters and was joined by my wife, son, cousin, who came with us in the 50s and 60s, and another cousin who hasn't been before, plus their husbands. It was a fabulous break, celebrating my 70th birthday, although it was officially back in February. John Potter has promised me a free holiday if I reach 100!

In the words of Craig Revel Horwood, ‘Fab-u-lous’ darling, or a ‘home from home’ as my wife says.

Thanks David for sharing your memories with us. Of course, we couldn’t let David go without getting him to wear his Hopton baby sash, which he brought along with him (see main image)! Keep sending us your Potters memories by emailing 100.Years@pottersholidays.com