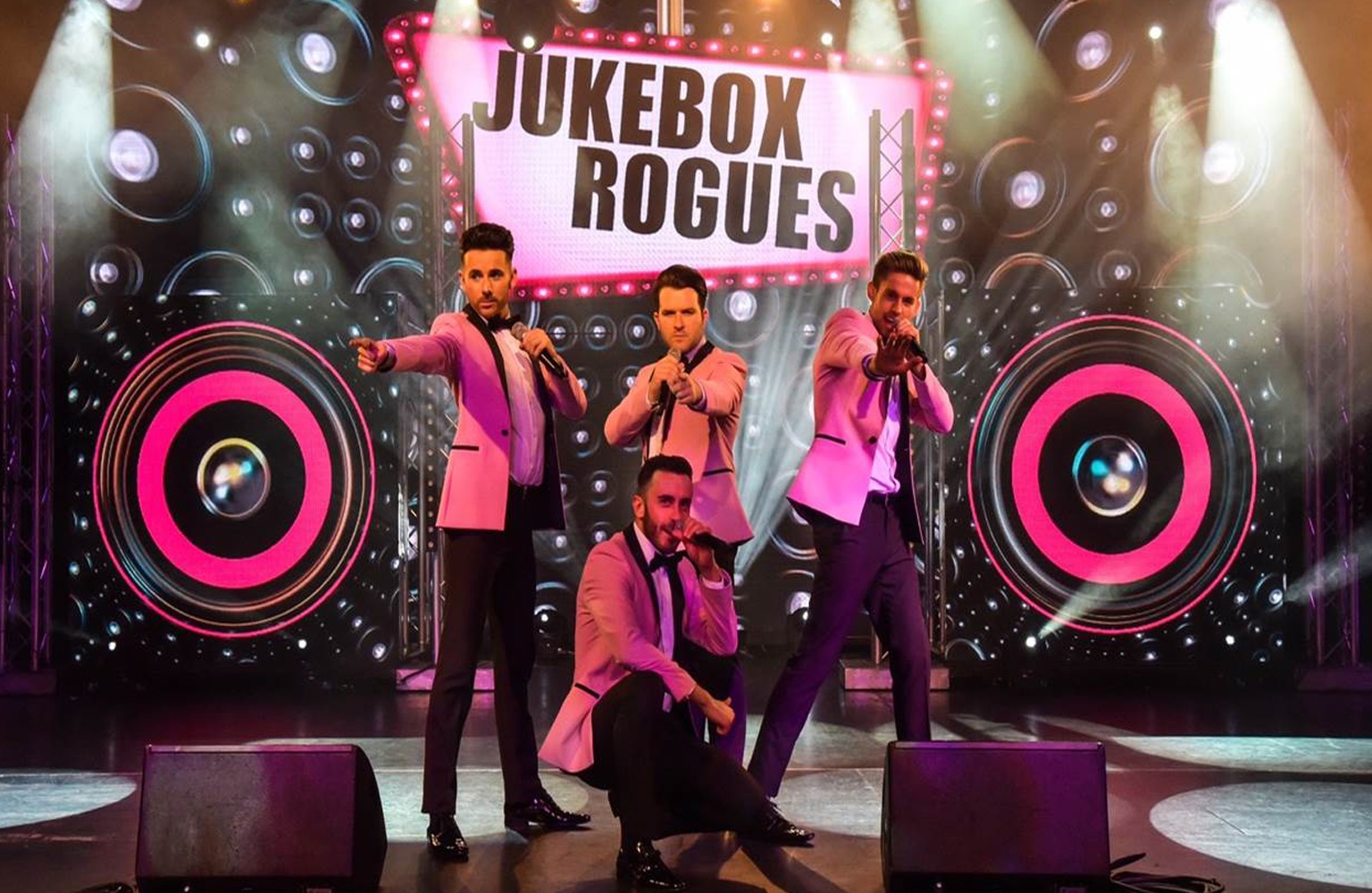 The Jukebox Rogues can be seen on select breaks at Potters, so get ready to hit the dance floor in the Atlas Theatre and party.

We caught up with the four handsome band members and their creator, David Griego, for a chat…

Can you tell us about the Jukebox Rogues?

David: “They are as eclectic as your favourite party playlist and bring only the biggest and best tunes to the stage, from Bruno Mars, Michael Jackson and Justin Timberlake, to mega hits from Luther Vandross, The Temptations & The Four Tops. The boys are all amazing singers and performers, and this show is really about getting the audience to dance and sing along, and have a really good night out. The show will evolve as we plan to update it regularly to incorporate new songs, and for different crowds. The USP is really that many shows you sit down and listen to, but with this one we encourage people to dance and get up from their seat.”

Chris: “There’s no set genre and it’s just music that people want to dance to, and we get people to join us on stage or we’ll go down to the audience and have a dance too.”

Billy: “From rock to funk and pop, there really is something for everyone in this show.”

Carl: “We sing songs from Stevie Wonder, R Kelly and so many big legends, and it is just a really feel good show.”

Boys, can you introduce yourselves…

Billy: “I’m Billy Roberts from Essex, I’m 26 and have been singing since I was around nine-years-old. I performed in Oliver when I was younger, have sung on cruise ships and my music inspiration is George Michael. I love Potters as it is such a friendly place. I’m the Essex geezer in the band, Gerad and Chris are the cheeky boys, and Chris is the softer one who is brilliant at one liners!”

Gerad: “I’m 30 and named Gerad McArthur, and I’m from Scotland. I’ve been singing since I was 17, and was in a boyband many years ago and we had two top 40 singles, and supported Westlife and Girls Aloud on tour. I’ve also provided backing vocals for the likes of Tom Jones. The Backstreet Boys and Luther Vandross are my inspiration and I’ve really found it incredible how much talent there is at Potters. People don’t need to go to the West End to hear great vocals and see the best dancers.”

Chris: “I’m Chris Britton, I’m from Ireland and am 26. I’ve done cruise ships and pantos, and started singing when I was around 10. My favourite music is swing music, like Dean Martin, and Potters has everything you need, and is like a cruise ship on land.”

Carl: “I’m Carl Tracey and am 30. I started singing when I was 15 and was in a pop band for Nickelodeon Junior called Go!Go!Go! I adore the music of Michael Jackson and at Potters I love the Jacuzzi and steam room, and how when you’re here it feels like you’re in your own bubble.”

What is your favourite song from the show?

Chris: “The opening number by The Temptations of Treat Her Like a Lady.”

How long have you been together for?

David: “The boys met in February at auditions and three of them are also part of Frankie’s Guys too. They’ve been rehearsing together as the Jukebox Rogues since the end of March, so it’s all new for them and really exciting that the show is debuting and being performed at Potters.”

Gerad: “One of the best things is how well we get on. We’re a proper team and have a laugh together.”

Where did the name the Jukebox Rogues come from?

David: “It’s because the boys cover a wide selection of music, like a jukebox, and the boys are charming and cheeky too. We wanted something that sounded old school but modern.”

What are the outfits like and how well can you all dance?

Carl: “We move a lot during the shows and have dance breaks to bust a move in the show.”

David: “Kane Silver has helped us with the choreography and it is more moves that suit each of the guys. Kane has worked with Nicole Scherzinger and worked on Got to Dance. Plus, Helen has helped the boys perfect their moves.”

Billy: “The stage elements of the show are really impressive, such as the screens, lighting and costumes. It all comes together.”

Chris: “We have a few costume changes in the show, and I love the pink blazers and tux that we wear.”

Can you tell us something interesting about you all?

Billy: “My dad used to play for Tottenham.”

Gerad: “I can play the recorder with my nose.”

Chris: “Victoria Beckham once told me I was cute.”

Carl: “I have 36k twitter followers and I’m doing the London Marathon this weekend.”

David, do you ever want to get up and perform with the boys?

David: “My job is to cut the music and the song choices, and make sure that the show is loved by the audience. I will cover when needed, but am more than happy to be on the outside now and watch them. I’m in safe hands as they are all so talented. Everyone has loved the show so far.”