We have lots to keep you entertained on #SummerofFun and we are so excited to welcome Exciting Science to Potters for the first time.

The incredible science show features lots of fun science experiments that have to be seen to be believed to create a magical interactive show. The action will take place in the Atlas Theatre so will be a real spectacle to watch from the comfort of your seat with opportunities to get involved in the fun.

We caught up with Kelly Sims, the creator of Exciting Science, who also stars in the show and was in Potters Theatre Company many years ago…

What experiments can we expect to see?

We are going to get as much as we can in the show such as elephant’s toothpaste, electricity, film canister rockets, smoke rings and creating some big bangs live on stage. Plus lots more fun performed by the crazy scientists. Who says science has to be boring?!

What ages is it aimed at?

It is loved by all ages and parents tell us how amazed they are by it, but we would say really that it is aimed at ages four and over. We like to get everyone to shout out and join in with the action and fun. While we do the lighting up, blowing up and burning, we will invite 9-11 year olds on stage to do smoke rings, as well as younger ones with their parents.

Tell us about your time in Potters Theatre Company…

I know Potters well as I was a singer in the Company many years ago and then went to the West End to be in the Rat Pack Show, became resident director and even took it to the States! Potters is brilliant and I learnt a lot, so I am really looking forward to coming back.

How did the Exciting Science show come about?

It all started when our then five-year-old son came home from school and decided that he'd like a science party for his Birthday. After looking around at various science themed parties, we decided we would create our own. The kids loved our film canister rockets, our vacuum cleaner missile launcher and smoke ring dustbins so much that we decided to go even further and turn it into a stage show. In a theatre there’s space to create even more mess, which is easier to clean than our lounge was at the end of our son’s birthday party! We’ve been doing the show for three years now and we love it. 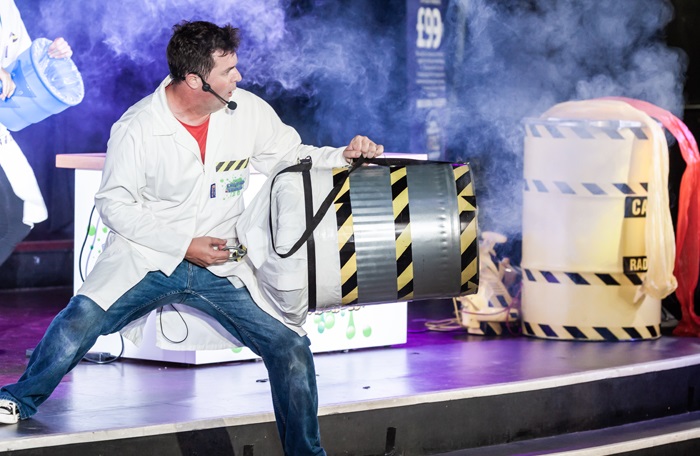 Have you always loved science?

I was fascinated by science but went to ballet school and couldn’t do my A-levels. I’ve always been enthused by it and am now doing a science degree.

Tell us about the people performing the experiments?

There will be two of us at each of the performances as we will take it in turns to come and see you. Mad Mike is the inventor of the group, handy with a role of gaffer tape and a set of pliers and he can turn anything into a new science experiment. Then there’s Dangerous Dean and he's like our very own crash test dummy - if there’s anything the rest of us are unsure of doing we make Dean do it first!

I’m Kindly Kelly and am a master of destruction and a demolition expert (and it’s not always intentional!) And finally there’s fabulous Faye and she knows her facts and science, and is just fabulous.

That’s an easy one and it has to be during the ‘coke and mentos’ experiment when Dangerous Dean, who has to pull the pin and move out of the way before the coke bottle explodes, slipped and fell into the paddling pool and got covered in a litre of foaming coke. I did suggest we keep it as part of the show but Dean wasn't too keen!