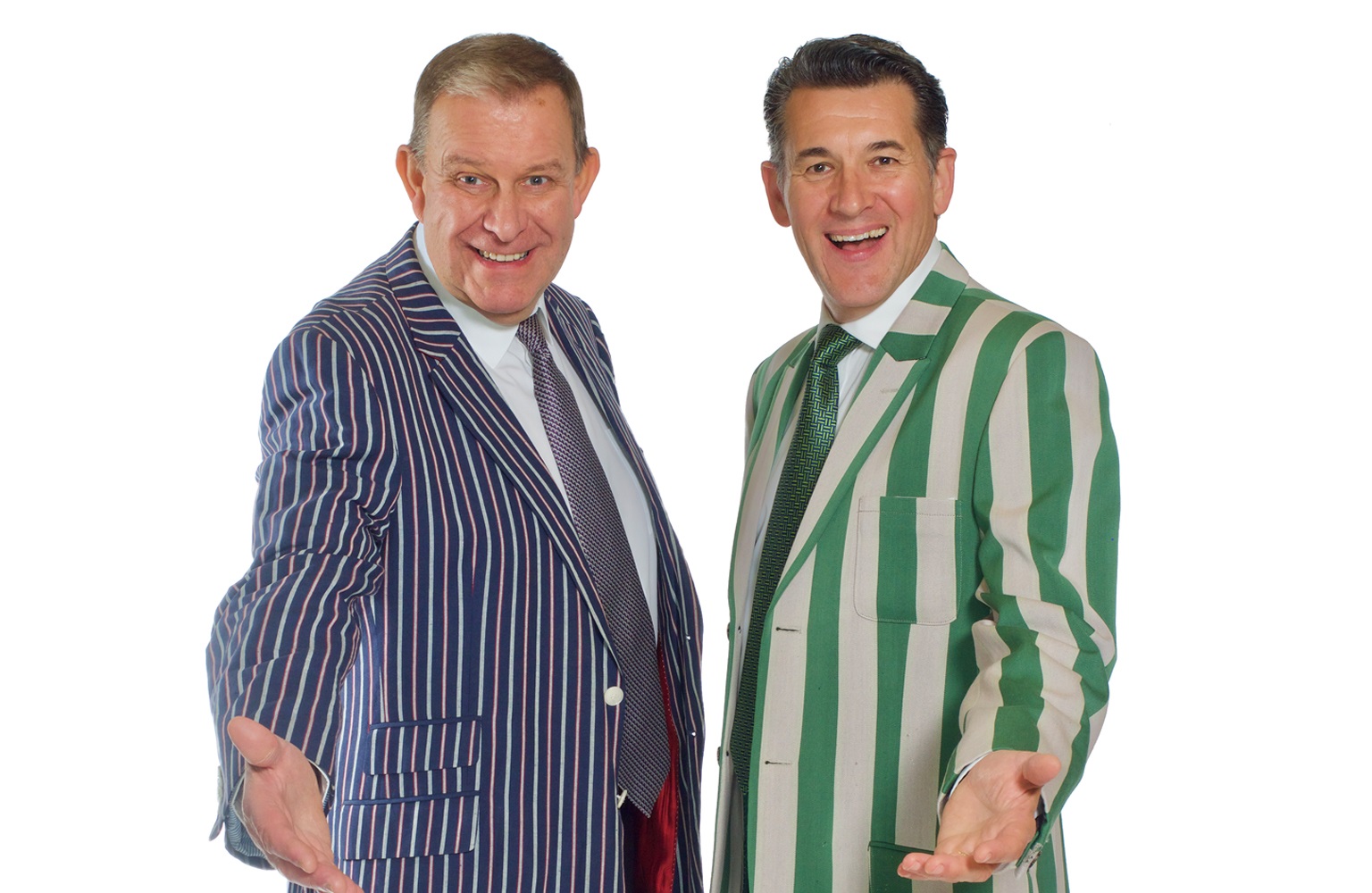 Two of Norfolk’s best-loved all-round entertainers are now appearing on Potters Midweek UK breaks. Comedian and magician Olly Day, and accordionist Nigel ‘Boy’ Syer, are on a mission to entertain you with their comedy, music and magic, and we caught up with the pair to find out about them and their show…

Can you tell us about what you do at Potters?

Olly: We appear in the Potters Laughter Show on one night on the Midweek breaks in the Atlas Theatre, performing a mixture of songs, sketches, and jokes old and new! Nigel and I start the show dressed as Teddy Boys, and we both do a bit from our own acts and then finish with a full-on Western sketch, dressed as cowboys and Indians. As well as that, we dress-up as Mexicans and I get a member of the audience on stage to be a ventriloquist dummy.

Nigel: We put on a varied show full of laughs, and hope to meet old friends, and make some new ones too. Our final song we perform is, You’ve Got a Friend in Me, and I think that says it all about our relationship with the audience.

What has been the reaction to the show?

Olly: Amazing! We have a chat with guests as they leave the Atlas Theatre and it has been overwhelming to hear how much they are enjoying the show.

Nigel: The incredible reaction never fails to amaze us as we hear how we made people smile and laugh. I feel so at home on stage that sometimes the audience seem to laugh at me as soon as I set foot on it… maybe it’s my funny hat or facial expression, but I’ll leave that for you to decide! I do know that there is nothing like the feeling you get when the audience erupt with laughter, or applaud an accordion instrumental.

What is your background?

Olly: I love magic and have been performing since I took part in a talent show in Norwich when I was just 15 years old, hosted by Potters very own Johnny Cleveland in 1979. He really encouraged me to go forward in the business and we have been firm friends ever since, so if there are any complaints, you know who to go and see! I’ve learnt my craft performing at various venues and I have the great pleasure in performing with the Jonathan Wyatt Big Band too.

Nigel: On leaving school I worked with my dad repairing washing machines, vacuum cleaners and loved every minute of it. On a family holiday I had the good fortune to watch the hilarious antics of Norman Wisdom, as well as Bert Weedon later on, and the seed was sown and my dream was to become an entertainer. Throughout my career I have worked alongside many acts, such as The Bachelors, The Wurzels, The Tornados, and Showaddywaddy’s Andy Pelos.

How would you describe your comedy?

Olly: I think I have an old fashioned approach to humour. I love all the classic comedians like Morecambe and Wise, Ken Dodd and Tommy Cooper, as well as Michael McIntyre and Brian Connolly, and I’m also a big fan of Count Arthur Strong. I like to engage with the audience and have a gentle laugh with them, but not at them.

How long have you been a double act for?

Olly: Well it all happened seven years ago when I was asked to host the Summer Laughter Show in Gorleston and I had known Nigel and worked on various variety shows with him for years. As soon as I turned up at the venue, where he was the star of the show, he said: “This is great Olly, let’s do a double act in the show.” It has been a fantastic thing for both of us as we still go off and do our own shows, but meet up each week at Potters, and also to write new acts. We could be farmers, fishermen, mad inventors, or even cowboys and Indians! I think there is a great warmth to our comedy, and both Nigel and I completely rely on each other on stage and know exactly where the other person is going with it. I love the fact that neither of us fights for the laugh. We don’t care who delivers the punch line, as long at it’s there and it builds.

Nigel: Although our paths have crossed many times in the past, my old friend Olly and I had the opportunity to create and be part of a double act. Without a moment’s hesitation, as I have always admired his comedy genius, we set to work. Between us we are never short of an idea, and with Olly’s singing background and magic we always have plenty to put in the cooking pot.

Olly: It’s a very silly one and is in the show at Potters, so you’ll have to come and see us, and see what it is.

Nigel: Two boys at the bus stop and one says to the other “Have I missed the last bus”. The other replies “No— there will be another one in the morning.”

Do you do magic and music too?

Olly: Yes, I love singing and we do lots of great songs from the 50s and 60s in the show, as well as some comedy songs. As far as the magic goes, I’m a proper conjuror and it is great to be able to make a living from your hobby.

Nigel: I purchased my first accordion over 40 years ago and taught myself to play, and I have got through many accordions over the years!

Do you laugh about Norfolk a lot in the show?

Olly: We do lots of jokes about Norfolk as we’re a funny lot and we can always laugh at ourselves.

Nigel: I am a Norfolk boy through and through, which is why I’m known as Nigel ‘boy’ Syer. Although I married the gamekeepers daughter and use my Norfolk dialect as part of my act, I love regional accents and it makes me smile to recall the likes of the singing postman.

What’s both of your biggest achievements in your career?

Olly: I think the thing I’m most proud of are my road safety magic shows that I have been performing in Norfolk’s schools over the past 26 years. It’s magic with a message and learning with laughter, and I have now been to over 1,300 schools with the show. My ‘pinch me’ moments have been meeting my heroes. Tommy Cooper came into a magic shop in Norwich where I was the manager in the 80s and I spent over an hour with him, showing him the latest tricks and jokes. He was so big and so funny. Can you believe in this day and age of selfies that nobody back then had a camera! Also Ken Dodd is another hero of mine and I met him in Lowestoft, and he invited me to watch the show from the wings. It was an amazing experience, and a long one, as he started at 7pm and ended the show at 12.45am! I got my picture taken with Ken in his dressing room at 1.30am as we were having a shandy!

Nigel: The icing on the cake, and I feel I can speak for both of us, is the joy of working at Potters. The team have looked after us so well, and the facilities as good as it gets, enabling Olly and I to concentrate on our performance. Although my dear old dad is no longer with me, the show must go on and this would make him so proud.

Olly and Nigel are appearing on our Midweek UK breaks this year, excluding family breaks.